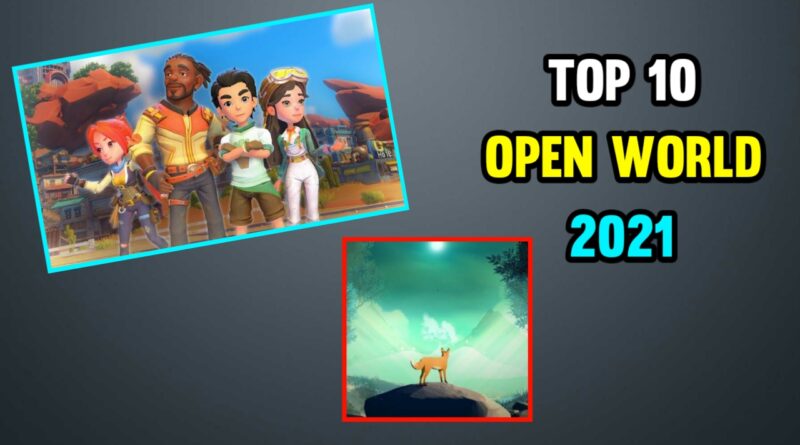 Open world games is what modern gaming is all about giving us the freedom to fly drive and sail through beautiful borderless environments. These games allow us to live our best lives even when the real world isn’t looking too hot. I bringing you some new open world games for your android and ios devices. so let’s start off with number 10 chimera.

A number 10 chimera world, this is mythology based open world rpg game. Where you can dive into the world full of ancient and distinct animals. Here you can catch ride devour and evolve ancient beasts to be your companions in the game. You have to explore the large open world and gather all the resources. You can to live on you can also discover lots of treasure that’s available on the map. And trade freely with other explorers in addition the game features. Lots of character options and a wide collection of weapons which will help you to hunt down other giant creatures. Overall it’s a great game with a lot of stuff to do.

A number nine bike extreme fail xd, this is a ragdoll physics based platform open world game. Where you have to ride a bicycle and perform different stunts to reach the finish line. The game has many different maps. Where you can ride your bike and enjoy the ragdoll physics. Also the mechanics of game play vary because of character choice and level design. You can choose different vehicles from cycle bikes to jet chairs to complete the goal. The graphics of the game are great but overall it does have some laggy game play. Which is very annoying as you well know.

My time at Porsche

Number eight my time at Porsche, if you’re a big fan of games like stardew valley story of seasons and animal crossing. Then the upcoming release of my time at Porsche should pique your interest. It’s a farming simulation game at the core. But it also offers a host of life sim features plus a few rpg mechanics and it all takes place in the 3d open world of Porsche. Where you discover your inner builder in the game. You gather resources and combine them in recipes to create the game. Also contains some dungeons that require you to fight enemies. Overall I’m really excited for this game.

Tales from the wasteland

This one’s open world action survival game, where you all get to see the post-apocalyptic environment in which you have to survive based on your skills in the game. You get to explore different areas of the map fight with npc soldiers and loot resources. You can collect different items from the map and escape from it at first glance tails from the wasteland. May appear to be just another third person shooter. However it is much more complex. also the game offers a wide range of weapons with three playable characters to choose from all in all. I like the graphics of the game.

A number six the first tree. the first tree is an open world game that has been very successful on platforms. Like Nintendo switch. In the game you play the role of a mother fox in the snow mountains of Alaska. Who is on a journey to find her cubs. You follow the white light, which will take you to the trees mentioned in the storyline with the final location being the first tree. It doesn’t have any text voice over. So you should probably use headphones. So you can clearly feel every detail in the plot. The game also has relatively simple controls and you’re immersed in a majestic scenery of nature surrounded by white snow. You can feel it from a third perspective. I know open world means open world but this game just seems to go on and on forever. You just go on and never seem to see the end.

Number 5 wilderness is an open world indie game. Where there are no quests, no enemies and no ads. You just need to go and go and go enjoying the moment of truly living with peace of mind in other worlds. It’s a stress-free game all about exploration at your own pace and it’s different from any other open world game. You’ve probably played before you can swim in the water drive ship and fly from one point to another. The game also features lots of new animals and creatures. So if you get bored of one of them then you can change your character. Overall I really like this game’s graphics and controls. But it’s still in the development stage and that’s why updates keep coming in on this game.

If you love gta then probably you’re gonna love grand criminal online too. It’s an open world game just like gta5. Where you can explore a massive city, defeating gangsters, stealing cars or fighting with other people. You can play it online with your friends and experience grand criminal online together. The game offers lots of things, which is similar to gta5 like casinos and businesses. Also the game features a wide range of vehicles and weapons. Which you can use for your enjoyment. Overall it’s a good game for those who are searching for alternatives of gta style.

A number three crazy drive three, this one’s an amazing free roam sandbox racing driving and stunting game. It contains lots of mini games and fun stuff to play around with it’s, fun to mess about in your own or with your friends. There are 5 unique areas located in crash drive 3 from deserts, the arctic up to the moon and more. You can play the game offline. If you prefer but I suggest you try playing it online. Overall crash drive is kind of a classic for me personally. The third game improves on the formula and adds more fun new content fun to mess about with on your own or with friends a definite recommendation from me.

The pathless this is an absolutely stunning game. the world is beautifully decorated and presented to you as soon as you start the game. The art style is unique and although, it took me a while to get used to that new style and the game’s mechanics. I had a blast the game is filled with unique puzzles that get gradually more difficult as you discover new areas. Unlike other open world games, the game does not feature a mini map players. Need to use a spirit vision in order to find locations of interest all in all it’s a great game.

A number one tower of fantasy is a free-to-play open world mmorpg. It utilizes what seems to be very high quality, very fast, very smooth action combat. The game utilizes a large open world filled with seamless transitions allowing players with huge areas to question and explore to your heart’s content. There are dungeons raids and various pvp modes to engage in it. Looks beautiful has a setting that I enjoy and has smooth combat and looks like it’s pretty story driven.