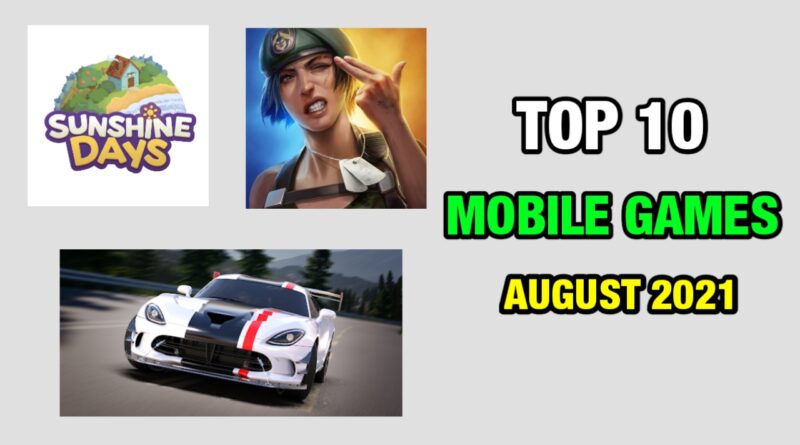 Man can you imagine living back in the olden days when all games are console or computer and you’ve only got a few new tittles per year thank goodeness. we live in 2021 where despite everything else happening around the world at least we got heapes of games. I’m back again with another list of the top 10 best new mobile games to get you through this month.

A war sector this is a multiplayer action game, where you’ll participate in fast paced real-time pvp battles. If I’m speaking about the gameplay. It’s very similar to a game called tactical. Where you take control of a soldier in this one you’re part of a team and your main objective is to capture all the points and win the match on the other hand. The game features 7 characters to choose from and each of them has their own unique perks and stats the games also offers lots of classic shotguns, sniper rifles and much more to fill up your armory and shooting fun. Overall the game has great graphics but it would be better. If you can have a 3d view and set a top down.

This is a horse riding and management game. Where you’ll get to ride and complete with horses of different breads and personalities in the game. You create your own equestrian character and horses and compete with other players in show jumping and level up in tears. You can ride out in extensive trails, where you can explore and find time trials the game. Also features different breads of horses like Arabian Swedish, warmblood, welsh, cobb and Frisian. And with all these different breads of horses you can train them to improve their stats. Overall the game has impressive graphics and you’ll definitely enjoy the game. If you’re into this sort of thing.

This is a great pixel art game with vibrant colors and puzzles that is either not too hard or not too easy. The game features a fresh cyberpunk theme and quality soundtracks that are comparable to popular cyberpunk type games. The game itself has you exploring a city and investigating crime scenes to solve the overall mystery by talking to people interacting with the environment. And solving the mini-game puzzles. the story itself is interesting and suspenseful. I’d recommend it to any casual gamers out there, that likes an easy going feel and a game that’s nice to look at too.

Sunshine days is an adventure game, where you explore an open world and make new friends. There is so much to do in this game you can participate in different activities Personalize your home and farm different items in your home backyard. Also you can customize your character and play with other people to help the locals out with a variety of activities. The game offers a huge open world map, where you can explore and collect different items. Which will help you progress your life in the game. In addition the game offers good graphics and controls. So check it out if you like this type of game.

Now this is the best realistic driving simulator highway racing game out there. The game is made with unreal engine 4 and features detailed car damage fully functional rear-view mirrors and dynamic reflections by completing missions. And leveling up new and upgraded cars will be unlocked. There’s 20 cars to choose from ranging from muscle cars to sports cars and in addition. Real driving 2 has different game modes, career mode, endless mode, time trial mode and many more. You can even get bonus scores by driving faster and overtaking traffic cars. The concept is very simple but the game does get pretty challenging so check it out.

Bonus game painty mob is a colorful endless survival game on apple arcade. In the game your goal is to earn as many points as possible by painting as many citizens as you can before being hit by someone in the mob. As you spread the paint you’ll have less to use on the next tab. So you’ll need to pick up objects around the environment to refill your paint supply. You’ll also need to watch out for bombs, which explode when you paint them. You can also unlock a total of 124 different characters by simply playing the game. Overall it’s a great colorful game with a very unique concept.

when playing pubg, you must have killed many players with the help of an ak-47, smg guns and you must have wondered at some point in time. How do these guns work the best. Answer is in the game world of guns is a simulation slash puzzle game. That essentially puts a firearm in your hands and allows you to study everything about it from the look of it. The inner working and all the moving parts that work within it the game itself. Features hundreds of guns and you can have four different x-ray modes. Where you can focus on inner working and see how that specific gun functions. This game is simply incredible and I recommend everyone checks it out.

What happens when you put rogue legacy and toy story together. This game is just incredibly well made from top to bottom. Character and mob animations and designs are great looking. The soundtrack ambiance and sound design are all wonderful. You play as brand a toy of a child that has been left alone in a part of the house. Overcome with an unknown darkness. You must venture forth finding familiar friends and fighting toy foes that have been corrupted. So for all you hardcore fans of platformers you gotta try this one out.

This one’s a crazy open world stunt in race game. Where you can race friends in monster trucks, tanks and other ridiculous vehicles. There are tank battles 10-person competitive multiplayer in game events. You can also completely customize your race car and drive around searching for secrets or hidden discoveries. It’s a game that emphasizes the silliness of its premise with the types of vehicles. You can drive including monster trucks and tanks. You can use these in different online and single player modes. Where you level up as you participate in these events to unlock new cars.

It is a 3d remake of the hit classic rpg released in 1995. Which the player controls a selection of three out of six protagonists. While each being has their own narrative they are drawn into a single quest to defeat the benavondos. And save the mana tree the chosen characters navigate the overworld split between town and country. Environments and fight enemies in real time combat during exploration. The player can find items treasure chests and hidden areas. Overall the game has a great storyline and smooth 3d graphics with full voice over in English and Japanese.

This is an action rpg that takes place in a dark cyberpunk world, where humanity is fighting back against a viral outbreak. You take on the role of an elite squad of heroes known as grey ravens and fight with infected machines and bosses. The game features high speed combat action, directly control your squad members in real time 3d battles. You’ll also be able to collect heroes by playing the main campaign and participating in-game events. The game features everything that you might expect from the genre like complex rpgs top-notch. Visuals and intense hack and slash combat also, the game is now available globally in the English language. So there we have it the top 10 best new games of the month.